This Newsletter features aspects of pupils' work on the Climate Change.

This Newsletter features aspects of pupils' work on the Migration and Urban Growth.

This Newsletter features aspects of pupils' work on the Citizenship and Democracy.

We have four main modules of work in our Strategic Partnership and we are publishing a newsletter featuring our work in these modules. This newsletter highlights aspects of pupils' work on the environment and sustainability. Each partner wrote contributed one article. The newsletter was published under the direction of Mr Nikos Voudrislis, 1st Primary School of Asvestohori.

International day celebrating Diversity
On May 12th we organised an exhibition of work to highlight pupils' work and to celebrate diversity in our school. Pupils were encouraged to wear national costumes or jerseys. Parents from Poland and Ethiopia prepared national dishes and pupils marked their countries of origin.

DISSEMINATION OF PROJECT
​THROUGH BOOK AND APP FOR SMARTPHONES

St. George and the Dragon - Play by Templários kindergarden pupils on the closure of school year, honouring this way our partner school in Barcelona - Les Acàcies.

The play was performed before the parents and school community with Erasmus Flag on the stage. This was an excellent dissemination activity also. 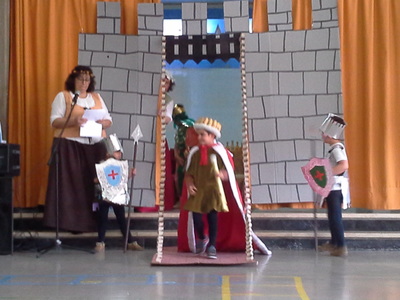 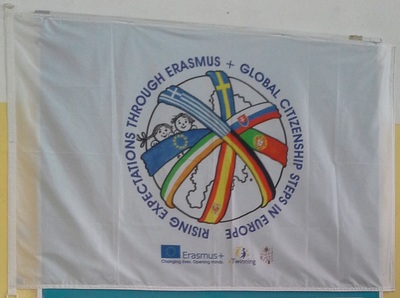 QUESTIONAIRE ON CITIZENSHIP
​TO THE PARENTS

THIS IS A PARTNERSHIP WORK ON CITIZENSHIP
​WITH CONTRIBUTIONS FROM 210 FAMILIES OF OUR SCHOOLS.
Firstly proposed and discussed on the 4th partnership meeting, in Kosice, September 2015, a questionnaire on citizenship and democracy has been approved on the following meeting, in Tomar, November 2016.

The importance of the different communities’ participation “out of the school” was somehow important on our global point of vue.

In fact, trying to understand how the families behave in this area might be an important glimpse to better understand pupils and their attitudes.

It was a delicate matter, though.

Although full of good intentions, it might be misunderstood by adults, so a preparatory work near the families has been important so that they became totally relaxed on the goals of our non-technical survey.

The general letter to the parents of all partner schools assuring total anonymity was an important step. Others initiatives taken by the partners according to their realities were a sort of reinforcement of those assurances.

As you know, our school belongs to an international partnership with six other schools from different countries. It is an ERASMUS + Partnership involved in a project named GLOBAL CITIZENSHIP STEPS IN EUROPE (Global Citizenship, for short). This project has been built over four main themes: Sustainability and Environment; Climate Changes; Citizenship and Democracy; and Migrations and Urban Development.

As well as involving pupils, we wish to give parents a voice with reference to the theme of Democracy and Citizenship.

This takes the form of a simple questionnaire.

We wish to ask 30 different parents (mother or father), in a rigorous anonymous way, their opinions on Democracy and Citizenship.

We decided on 30 questionnaires to facilitate the final treatment of the data of all seven countries. These questionnaires will be distributed so that they might represent the pupils’ diversity.

The questions are related to the rights of citizens’ participation on everyday life (country, region, or local).

Please, take good note that the questions may look “political”. Rather they are in the sense of "civic" rather than the way political parties act.

By doing this, we firmly believe that we are crossing the school walls and making parents as an active part of our project.

Thanking you in advance for your contributions (note that a questionnaire that will be returned in blank is a valid contribution!). Here you have six “closed” questions and one “open” question.


YOU MAY DOWNLOAD THE GENERAL DOCUMENT - questinaires, answers and conclusion hereunder.
Dissemination is also made from news. In this case, the Tomar TV station published in is website the following about the book Hystory of Tomar for Young People, by Carlos Trincão, referred in this site, on MiGRATION page, sub-page Portugal. In yellow, the reference to the Project.

The blog TOMAR NA REDE, directed by a portuguese journalist from Tomar working in Switzerland also published some info on the subjet, referring also the Erasmus project. This blog is read all over the migrants portuguese communities in the world. Click here to see the info.

On the 9th of May, Gualdim Pais School 7th grade pupils, under Geography teachers supervision, organized an exhibition in the school library about Europe and Europe Day. 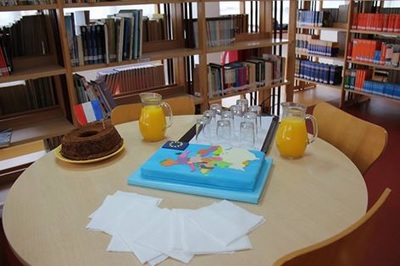 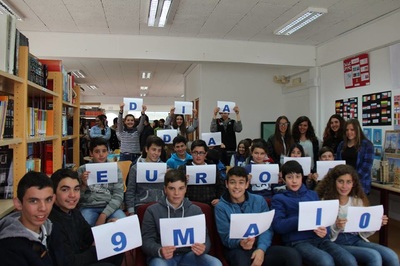 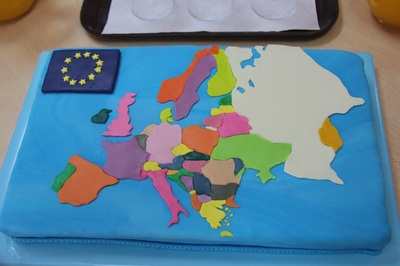 Templários Group of Schols deciided that the then´me to the banner that the partnership decided to make in each country according to their realiyies took the form of a big banner that was used also to advertize the Solidarity Fair (two days in Aptl 2016 - 15th and 16th) held in municipal facilities. You may see images of this fair on CITIZENSHIP page.

This has also to do witth the activity of VOLUNTEAM.

The banner was created in Santa Iria School, under Mrs. Gaudêncio supervision.

This was also a dissemination activity on our Erasmus Ptoject on the theme of Solidarity / Citizenship. 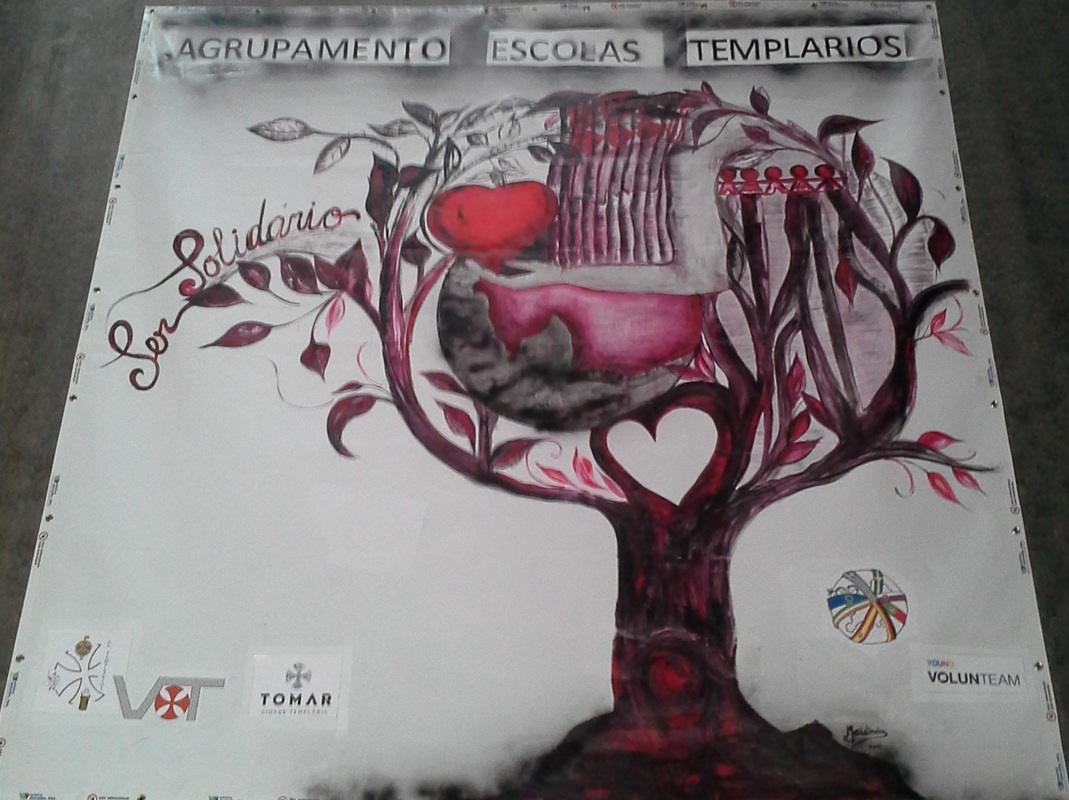 1st grade children of Mrs. Fátima class have though and discussed about the on our planet. Since fires and floods, to waste and polution, pupils have done two works: 3 posters to the classroom to illustrate their conclusions and a leaflet to be given to parents and others outside school. This way, they have made three things: research and conclusions; information to the community; and dissemination of our international project. Great job. 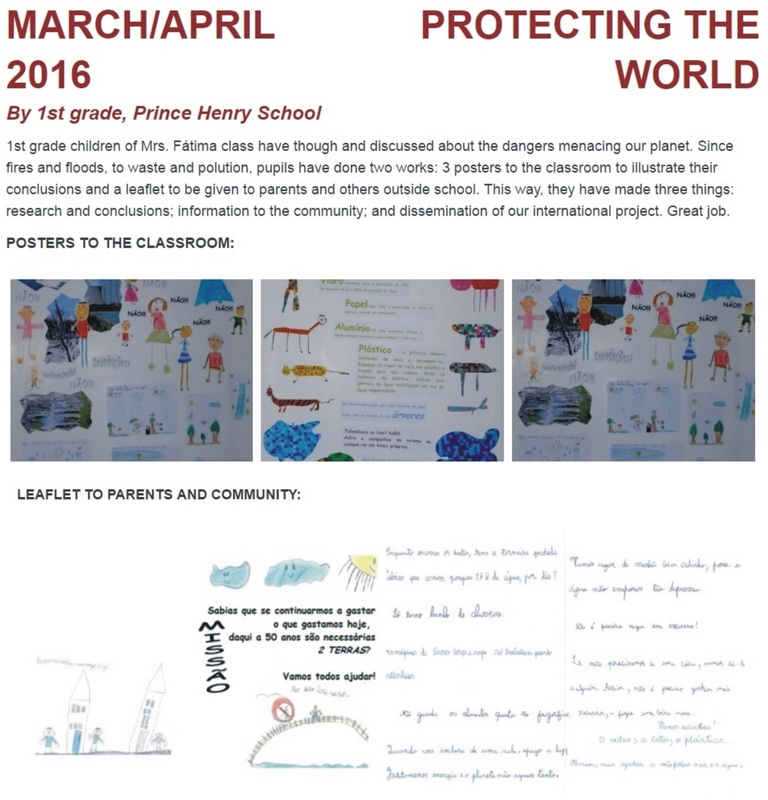 For the second year, the Municipality of Tomar promoted a Fair with al the eucational actor in the city to enhance entrepreneurship and employement. Our Group of Schools was represented, as last year, and has used aldo this fair as an opportunity to disseminate the international partnerships and current Erasmus Project, as it did last year. On the photo, the Director of our Group of School and the eputy MAyor might be seen ob an inteview for a local radio station. On the back, the map of european countries with whom we have collaborated might also be seen. 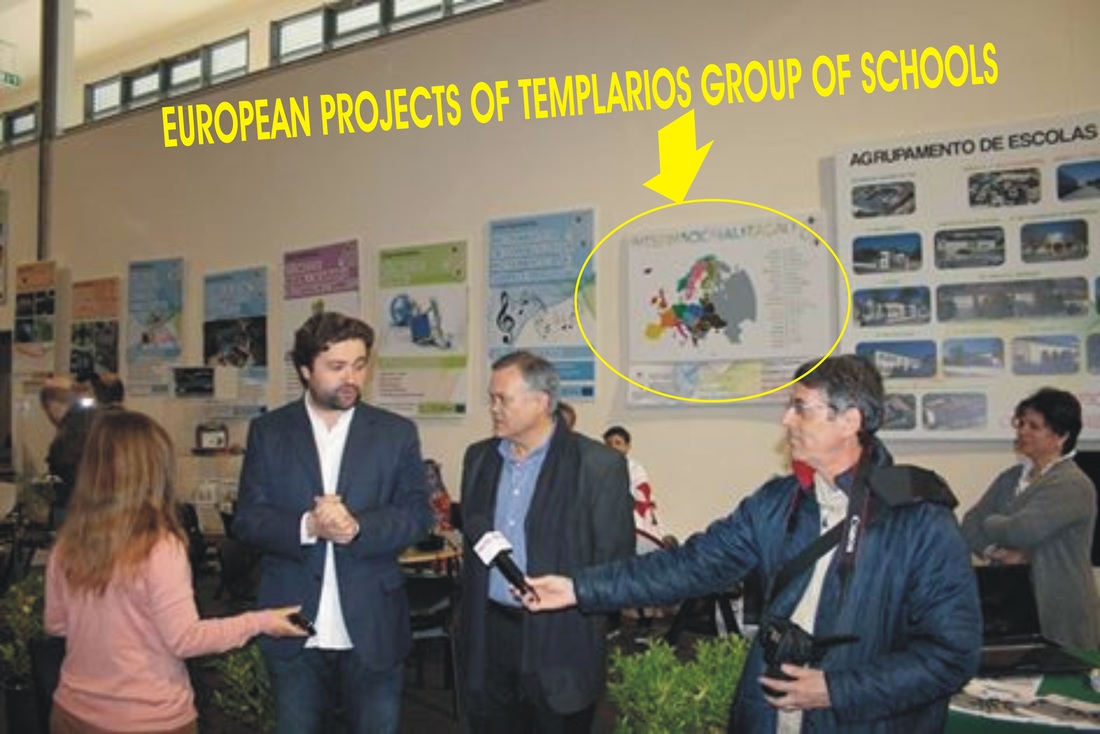 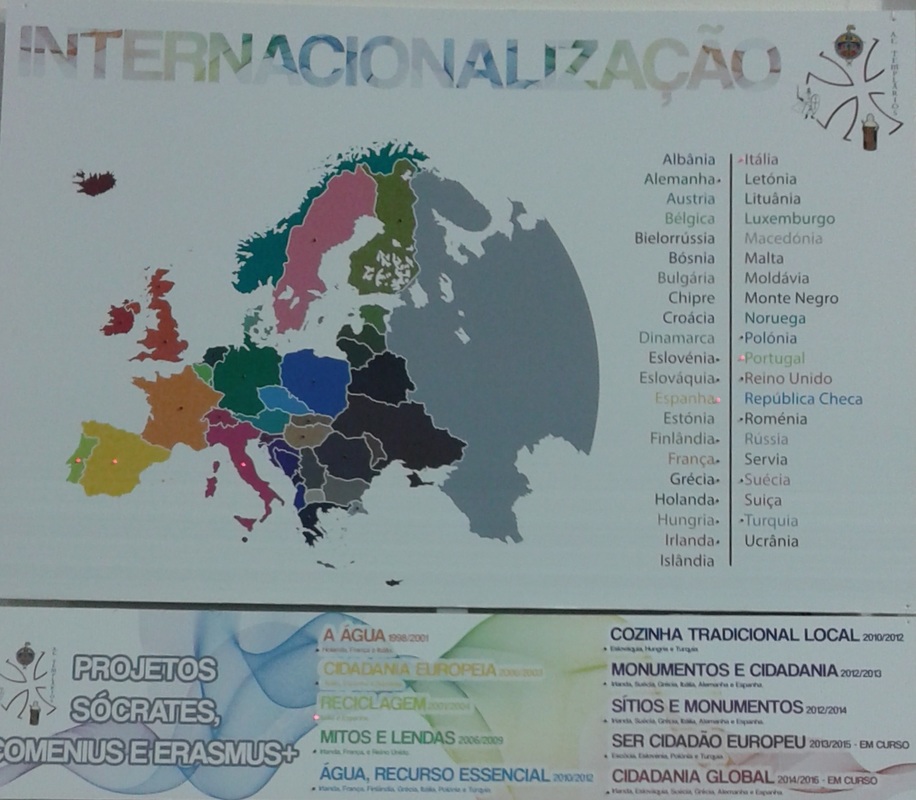 On the Foundation Day of our City,
the city parish municipality displayed one of our project big banners.
This dispaly was public for one week before the eyes of the city and visitors. 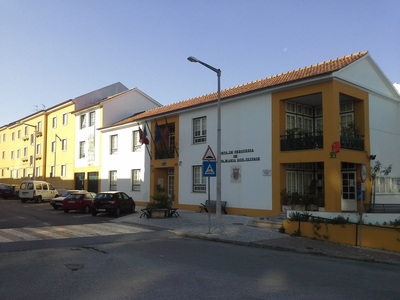 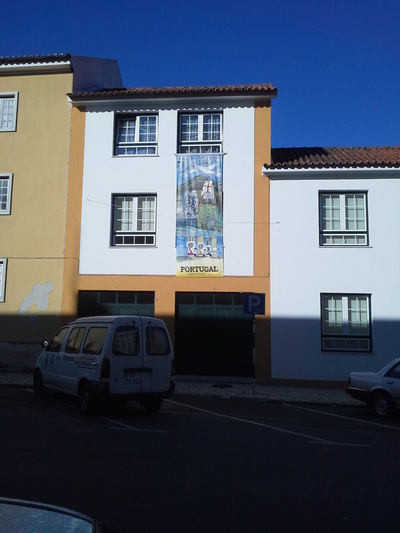 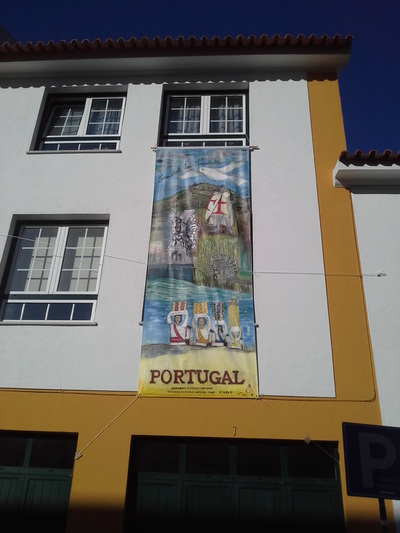 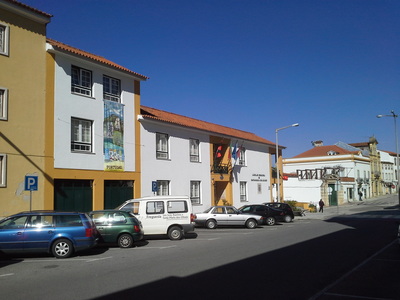 Launch of Project Calendar at Second Transnational Meeting in Bielefeld
Our calendar was officially launched in Ernst-Hansen Schule by the Deputy Mayor of Bielefeld, Ms , and our Portuguese publisher, Carlos Trincao
Newsletter
This is the first newsletter of our project giving the wider school community some information about our project, and about the schools involved in this project.

Choir at Minister's Visit Oct 2014 from Erasmus+ on Vimeo.


It was a special occasion when the Minister for Education and Skills visited St. Michael's School to formally launch our project, "Global Citizenship Steps in Europe". The Minister was accompanied by two Members of Dáil Éireann, Derek Nolan and Brian Walsh. Both Derek and Brian are past pupils of St. Michael's. Also present were teachers from all partner schools, parents, pupils and local representatives. Ms Lisa Fox was present from Leargas.

﻿On this day, the teachers Carlos Trincão and  Isabel Inácio presented before the council, in short terms, all the 10 projects that the schools of our group of schools have been involved in since 1998. Closing the presentation:
GLOBAL CITIZENSHIP, of course.
CLIK HERE TO HAVE ACESS TO THE POWERPOINT PRESENTATION.﻿ 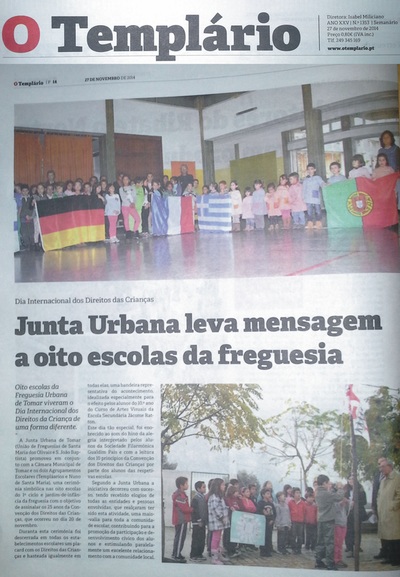 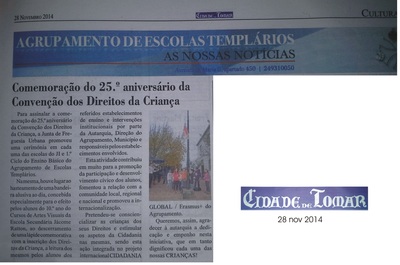 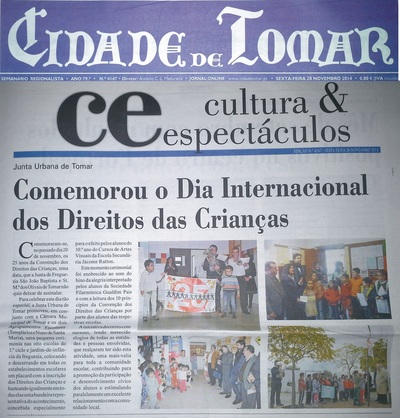 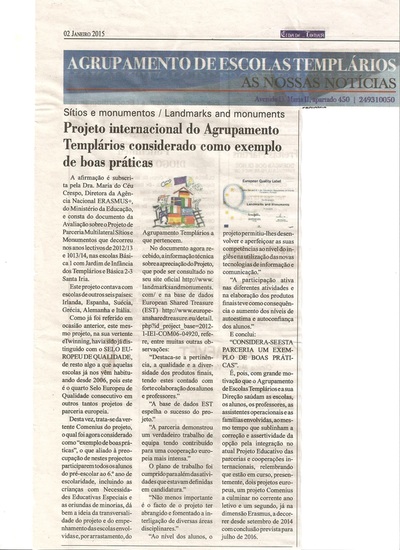 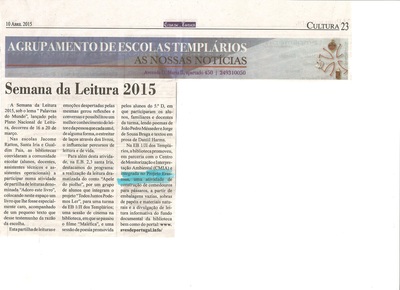 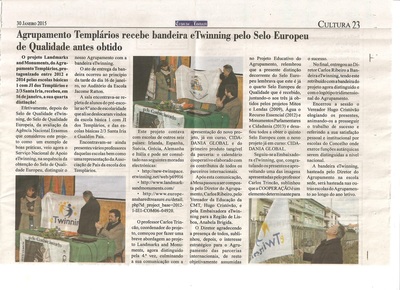 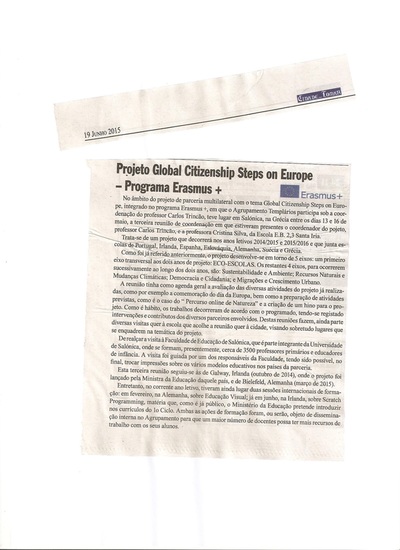 21st MARCH: THE DAY OF THE TREE

PLANTING IN TOMAR THE OLIVE TREE FROM HELLENIC REPUBLIC WITH LOCAL POLITICAL AUTHORITIES (PARISH HALL AND CITY HALL) THAT PROVIDED THE PLACE FOR THE PUBLIC PLANTING.
The act had the presence of one class of Templários school, its teacher and  members of the school staff, the general director of our group of schools, environment technicians from the City Hall, the Fire Department Deputy Comander, the President and the Secretary of the Parish Hall and the Education Alderman from City Hall. 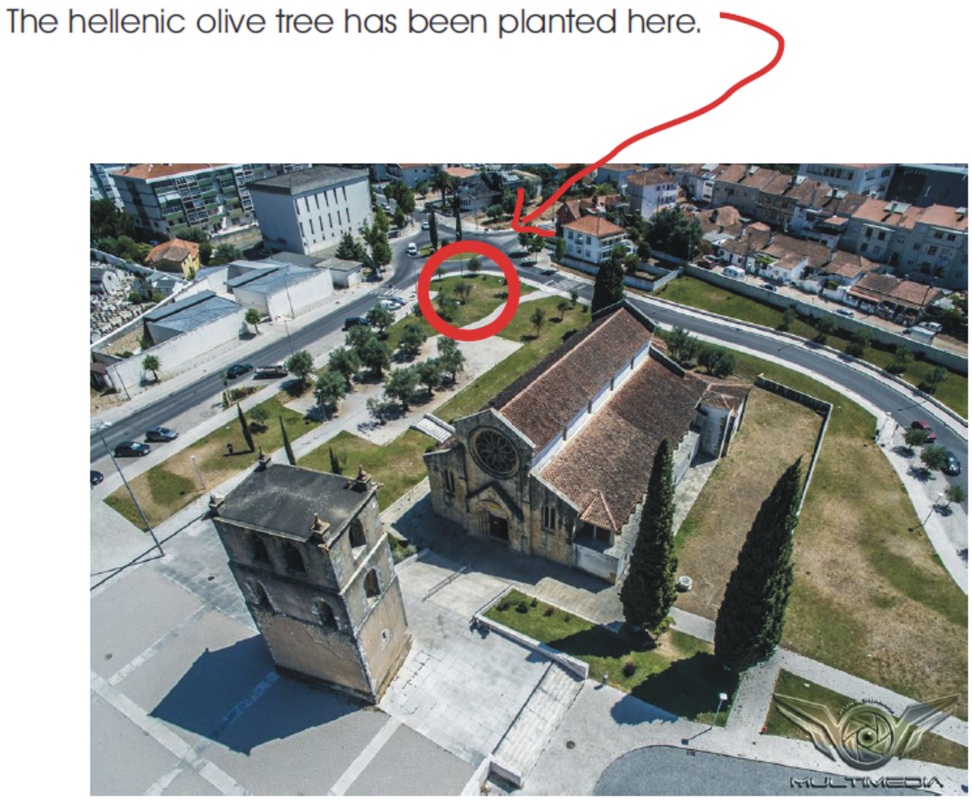 On the 6th of May, 2015, following the workshop in Bielefeld on art, a local trainning session was held at Templários school by Mrs. Carla Silva, one of the portuguese participants og the german workshop. There were 20 primary and kindergarden teachers. The trainning session was a great momentoi for fun and getting new working tools. Here under, you may find several documents, such as the "diploma" that has been given to all participants, signed and stamped by the general director of our group of schools, a link, on the image of the first slide, to a the powerpoint initial presentation as well as slideshow of the pictures taken by then. The teachers came from 6 diferent schools of our group of schools. As a curiosity, in one of those schools, for the school year book of S. pedro school, the teacher invited the mothers of the pupils to decorate each one's anual book with the learnt techniques. This was also a sort od«´f siddemination among the school community. 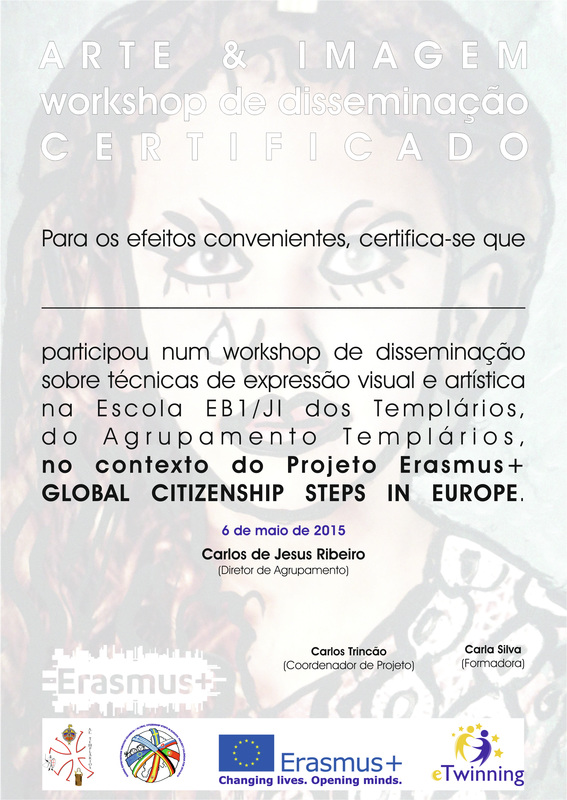 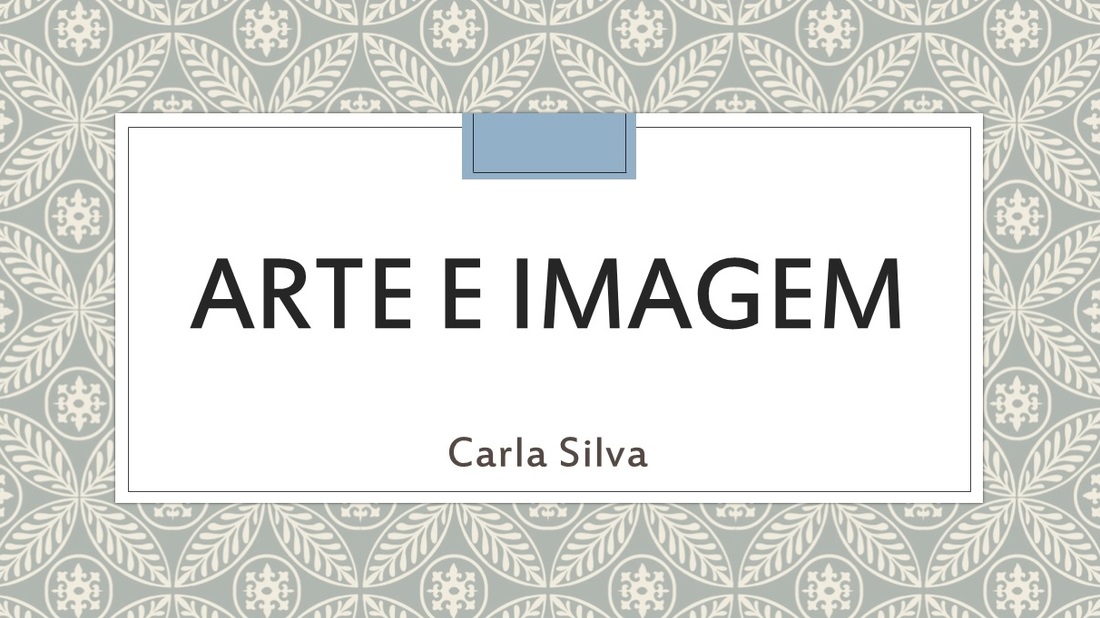 On the 16th january 2015, a cerimony was held in the group of schools amphitheatre for us to receive the eTwinning flag due to the European Quality Label our previous project (Landmarks and Monuments) had won. The Education Alderman form the City Hall was present next to our general director and the member of the portuguese NSS, who delivered the flag.

Here under you may find the notice that local press has published), the local press article and two slideshows: one, concerning the act at our group of schools main school (Jacome Ratton Secoondary School), on the 16th january 2015, with rising of the flag; and a second slideshow concerning the rising of the flag in another schoo of our group of schools (santa iria School), on the 27th january 2015.


On the occasion, the new Erasmus Plus project GLOBAL CITIZENSHIP STEPS IN EUROPE was formally presented to the community. 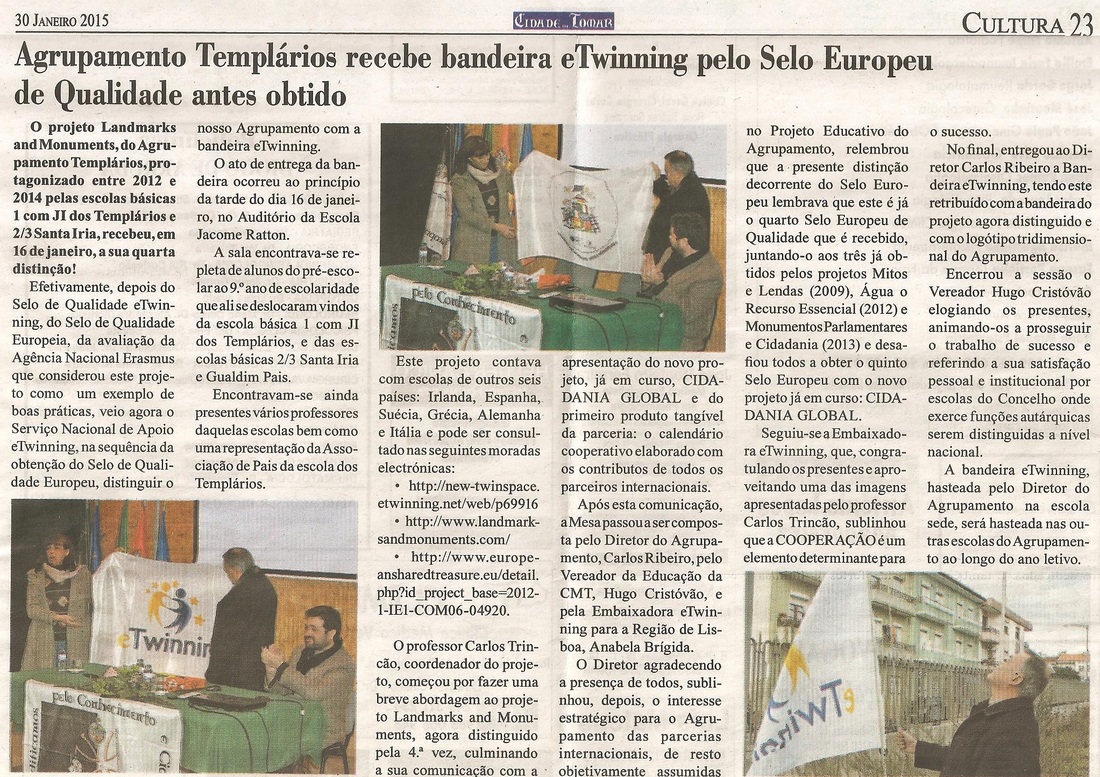 Below: act at Santa iria school