Santa Iria 6th grade pupils, used their work on climate changes for our Group of Schools to participate  with contents on project newsletter about the theme.
To start with, we, 6th grade class D, watched a Portuguese TV station programme named “Race against Time”. It is a work that shows the net of effects caused by climate changes. It took two years to be filmed, edited and presented. In this show, a five countries voyage has been pathed since the Artic to the east Coast of the United States. Several questions related to global warming are raised, some answers are given and there’s a big alert to the consequences cause by those changes in the Portuguese way of life for the next decades.

Seeing this TV show and several other documentaries, the class became astonished and a brainstorming and debate on the theme let us, pupils, quite worried and aware that the race against time had already begun. Moreover, we know now that the responsibility to delay the global warming effects is a global responsibility, including ourselves.

Amongst other aspects, we were surprised with the future that is waiting for our planet, in general, and particularly to the Iberian Peninsula and Portugal. Without being too alarmist, we are now aware that our geographical position enhances dangerously the country, mainly the southern part, with a progressive desertification and extreme and contradictory wheather phenomena

We also wanted to know what the big and powerful are doing to lower those future effects and we realized that it is mandatory and paramount to develop and profit from new and alternative energies. Conferences are not resulting properly: the glaciers keep on melting, the level of the waters keep on rising and the destruction of the planet is in progress…

There is a Portuguese popular saying: those who sow winds crop storms!

By the way, the national Portuguese media noticed recently that Portugal was able to have all its energy for 107 hours coming from non-fossil resources.

Later on, we were asked to research more about the theme in groups and that each group would create a Power Point presentation on our group works: we ought to speak about consequences of climate changes and imagine possible measures to fight them.
We strongly hope that we manage to solve, altogether, the problem!

The result of our work was four PowerPoint group presentations to be displayed at school and at the Erasmus Project Website. The images that go along this article are some of the slides we made. Two of the powerpoint you may see directy; the other two, because of uploading dificulties, were exported to Googledrive and you may acess them with the link.
1st grade children of Mrs. Fátima class have though and discussed about the dangers on our planet. Since fires and floods, to waste and polution, pupils have done two works: 3 posters to the classroom to illustrate their conclusions and a leaflet to be given to parents and others outside school. This way, they have made three things: research and conclusions; information to the community; and dissemination of our international project. Great job.
POSTERS TO THE CLASSROOM: 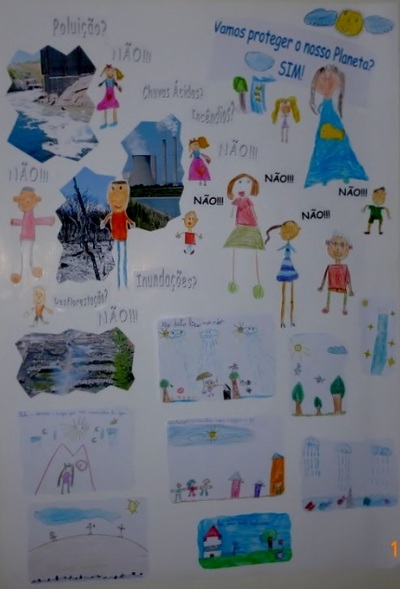 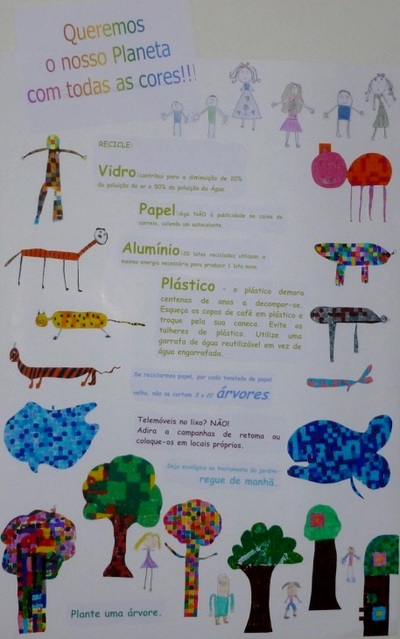 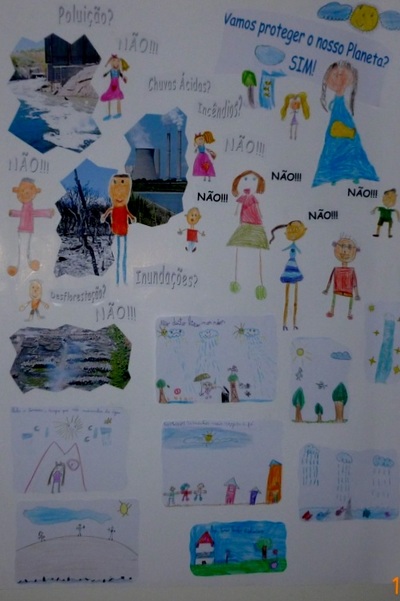 LEAFLET TO PARENTS AND COMMUNITY: 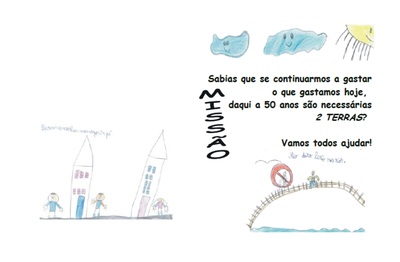 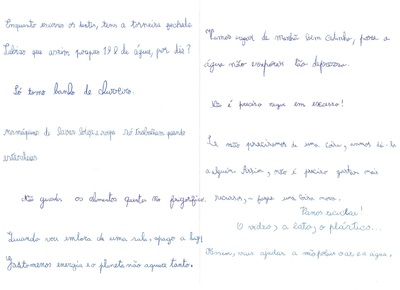 ﻿By 3rd grade pupils of Templários School, Tomar.﻿
May, the 24th 2015
Mobility by car increases carbon dioxide in the atmosphere; we might use public transportations.


Recycling is important to preserve Nature.


Water is essencial to life. Its overconsumation, polution and water contamination are troubling factors that will condition the use of water on the years to come.

Pupils and teachers have been alerted to environment dangers ans climate problems as well as some informations about plants and the way they interact with their habitats.